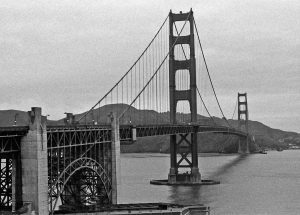 The route into Marin County before the Golden Gate Bridge wasn’t a very practical one. If you wanted to get across, you had to take a ferry, and even with regular service you could expect a very long commute. Today’s Golden Gate traffic isn’t a lot better, but it does demonstrate alternatives to reliving congestion in traffic.

Until 1916, most of the proposals that attempted to outline how to build across that expanse were dead-ended. James Wilkins, an engineering student, wrote an article that he used to describe and market his idea. The city was intrigued, but deemed the costs of his project to be too high. They decided that they should challenge architects nationwide to do it better and more affordably.

The construction project became a political hot basket of infighting between Union workers, railroads and powerful business interests. Some were heavily opposed to the idea because the bridge would compete directly with rail lines and other infrastructure put into place.

It was the auto lobby that finally ended the fight. Introducing cars to common city life meant new roadways needed to be built. It would be impractical for the auto-owning citizen to take a ferry, so the auto lobby went to work. In January of 1933, construction officially began. It ended four years later in April of 1937.